Fitzgerald has held a crucial role in driving ServiceNow to its claim to success: no other cloud company has reached the billion-dollar revenue mark as fast as ServiceNow.

When I joined in 2011, our global revenue was around $100m and we were 200 people strong. Today we are on track for revenue of $1.3b+ for 2016 and have over 4,000 people. We have achieved five years of significant growth, says Fitzgerald. He emphasizes that growth will continue strong. The company projects $4 billion global revenue by the end of 2020.

Fitzgeralds career has taken him around the world. Prior to ServiceNow, Fitzgerald worked as COO for SignalDemand in Silicon Valley. At the age of 32, Fitzgerald was one of the youngest Global VPs at Oracle. Earlier in his career Fitzgerald held services leadership roles at Siebel Systems and worked in senior services management positions at Shell, IBM Consulting and Andersen Consulting.

I wanted to be a business leader and not a functional leader. Thus an MBA was always my aspiration.

Fitzgerald has lived and worked across three continents and describes himself as a comfortable global citizen. Born and raised in Ireland, his secret to success has always been hard work. Fitzgerald is living proof that it pays off.

I come from a working class family. I was the first student at my secondary school to go to college, and then to university, Fitzgerald explains. I tell my team all the time that I am probably not the smartest person in the room, but my work ethic is solid and I am a strong no nonsense leader.

Fitzgerald is also an Aalto EE alumnus from Singapore. He graduated first in his EMBA class of 2004.

The EMBA allowed me to sit in the same room with world-class professionals and ask relevant questions, understanding the macro points of each business function. It moved my thinking to the next level.

I wanted to be a business leader and not a functional leader. Thus an MBA was always my aspiration. There were a number of components that made Aalto EMBA attractive to me. It brought in professors from around the world, allowing students to be influenced by not one but many great institutions. It also provided a good slant towards both tech and global – and the EMBA format allowed me to work and travel during the week, which was vital, Fitzgerald lists.

Although Fitzgerald was well on his way building a successful international career prior to attaining his EMBA, he asserts that the degree had a crucial role in pushing him forward. Most importantly, Fitzgerald says it gave him confidence to act as a leader in a global role.

The EMBA allowed me to sit in the same room with world-class professionals and ask relevant questions, understanding the macro points of each business function. It moved my thinking to the next level, Fitzgerald confirms.

Without the EMBA, I would not have been as comfortable – pardon my language here – calling bullshit on a marketing strategy that was not driving the business. The degree allowed me to be very pragmatic and relevant as a general manager. 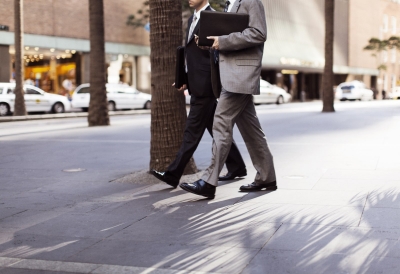 Fitzgerald has two hints relating to timing and commitment to candidates considering an EMBA.

Get your degree at the right time. I came in with a fair understanding of how business works but with clearly a lot to learn. I would not recommend an MBA to someone without reasonable exposure to all the different functions of a company, Fitzgerald says.

He also underlines that commitment is everything. I had actually started an MBA earlier in Australia and aborted after 6 months. I had not emotionally committed to doing it before I signed up. You must be mentally prepared for two years of hard work.

In the years following his EMBA, Fitzgeralds career has taken him and his family around the globe and back again. Today Fitzgerald, his wife and three young children are back in Singapore.

While Fitzgerald travels a great deal during the week, weekends are family time, which give his life good balance. On weekdays he starts his mornings with a 10-kilometer jog at 5 am.

I like combining my time for thinking and exercise. I am a strong believer in continually developing every aspect of my life. I started my professional career very early, and although I have 25 years experience, I still have a sizable portion of my career ahead of me. My work is not done, Fitzgerald smiles.

With discipline and hard work you can go anywhere.

He has a great deal to smile about: under his stewardship over the past three years, ServiceNows APJ market has experienced significant growth in terms of headcount, office openings and revenues.

His peers recognize Fitzgerald as a man able to set ambitious strategy and make sure his company meets – and often exceeds – the desired outcome. With Fitzgerald in charge, ServiceNow APJ has exceeded all critical metrics to-date and it was the companys top performing geography globally for 2015.

I grew up on a dairy farm in Ireland. I admit I chose my first school based on its successful sports team instead of its academic merits. You could not take a more unconventional path than I have taken but that does not have to define you. An Ivy-league education with a clear career path in mind from day one is a great option, but by no means the only path that will take you forward. With discipline and hard work you can go anywhere.

ServiceNow sells cloud software for automating processes, helping modern enterprises operate faster and be more scalable than ever before.

Mika Matikainen, Aalto EMBAChief physician Mika Matikainen is Head of Urology Service at HUS Hospital District of Helsinki and Uusimaa. Matikainen has had an extensive career in...

MBA or EMBA – Which Is the Better Choice for You?

MBA or EMBA – Which Is the Better Choice for You?MBA and EMBA programs have a lot in common, and a few clear distinguishing factors. Katri Koivula and Mikko Laukkanen explain why both programs are a ...

Sonja London, Aalto EMBADirector of Licensing Sonja London has worked for Nokia for nearly 13 years. Alongside her work at Nokia, London is a Board Member of growth company F...

Medical Director Sally Järvelä’s career path: ”The EMBA studies showed me what leadership is really about”Sally Järvelä is the Medical Director of Kanta-Häme Hospital District. She has advanced in her career at a fast pace, successfully combining work, fam...

Kristiina Golan, Aalto EMBAUpon starting her EMBA journey, MD Kristiina Golan had over two decades of experience in public health care and she worked as a Chief Physician in Hel...

A Fine-Tuned Strategy from the EMBA Business Strategy Project

Choosing the Right Program for You – the MBA or EMBA

Choosing the Right Program for You – the MBA or EMBAAalto MBA and Executive MBA programs have a great deal in common – and certain clear differences. Katri Koivula and Mikko Laukkanen explain why both a...