Leadership Inspiration from the Aalto EMBA

CEO of Estonian electricity and gas transmission system operator Elering, Taavi Veskimägi, has had a fascinating career spanning civil service, politics, NGOs and corporate life. One of his favorite sayings is the title of a book by Marshall Goldsmith: ‘What Got You Here Won’t Get You There’. Veskimägi says this notion also aptly describes why he found EMBA studies at Aalto EE highly relevant for his growth as a leader. 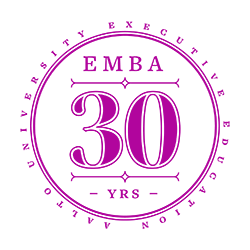 Veskimägi joined the Estonian Ministry of Finance as an apolitical civil servant in 1996. Later on he served as the head of the Public Administration Department and a non-political advisor for the ministry.

The ability to learn is a critical success factor in leading organizations.”

“During that time, I encountered something as a glass ceiling and realized that my ability to influence Estonian choices was limited by remaining apolitical. I saw things I wanted to change, but as a civil servant I had no power to do so, since political decisions were required,” he reminisces.

In 2001 Veskimägi and a group of like-minded friends founded the center-right Res Publica party. In politics, Veskimägi was a member of the Estonian Parliament Riigikogu for two consecutive terms. From 2003-2005 Veskimägi served as Estonia’s Minister of Finance.

“Seven years in politics was enough time for me to get things done and to learn and develop as a person. I led the working group on reforms for the liberalization of Estonia’s electricity market, and based on that experience, in 2009 I applied for, and was selected for, the position of the head of Elering – the company which we founded to manage first Estonian’s electricity grid and later on the gas transmission grid as well,” Veskimägi describes.

The future belongs to those who learn

Veskimägi underlines that in the modern world, the ability to learn is a critical success factor in leading organizations.

“The philosopher Eric Hoffer wrote that in times of great change, the future belongs to those who learn,” Veskimägi explains.

As the head of a company, you can’t compromise in your work.”

“Learned people usually discover that they’ve been prepared for a world that no longer exists. So the best thing you can do for your colleagues and yourself is give them the chance to learn, re-train and acquire extra skills,” he adds.

Veskimägi has tried to follow this model of thought and set an example to others by regularly learning new things. After working as CEO of Elering for a few years, Veskimägi decided to take part in the Executive MBA program at Aalto EE alongside work.

“One of the main reasons I chose Aalto EE was the fact that it allowed me to keep working at Elering 100% and fulfil also many other professional duties that I have. As the head of a company, you can’t compromise in your work. Your job is to get results. As such, my choices were logistically limited to Nordic EMBA programs, and Aalto EE’s program excited me the most. It truly is a world-class program,” Veskimägi describes.

You find what you are looking for

During the EMBA, Veskimägi aimed to work through his previous professional experience with the help of theoretical literature.

“For the first time I felt as though I was ready to take that sort of journey. The EMBA is of value once you’ve accumulated enough experience to link theory and practice. My aim was to acquire new ideas in order to consciously and systematically process the experiences I had gained in the 20 years of my working life,” he explains.

Since I completed the EMBA I’m a much more strategic, present, focused, and collected leader.”

“One of my favorite authors, Saul Alinsky, rightly pointed out in his book Rules for Radicals that events – or ‘happenings’ as he calls them – only become experiences after they’ve been reflected on mindfully. That’s precisely the toolkit I came looking for at the Aalto EMBA. And I found it,” Veskimägi affirms.

In addition to linking experiences with theoretical knowledge, Veskimägi explains that he hoped to find inspiration for the future from his studies. He wanted to be open to new perspectives, generate impulses for new ideas, and develop his capacity to be present at crucial and meaningful moments in his life.

“You find what you are looking for. I joined the EMBA program looking for inspiration, and I found it. My colleagues have said that since I completed the EMBA I’m a much more strategic, present, focused, and collected leader,” Veskimägi points out.

Exciting opportunities in the energy sector

Veskimägi says he still thoroughly enjoys work at Elering. The explains that the reason he applied for the post in the first place, and then stood for a second five-year term, was that there were a lot of projects underway: the uncoupling of the electricity systems of the Baltic States from Russia, the unification of the Finnish and Baltic gas markets with all the infrastructure that entailed, and the digitalization of energy systems, just to name a few examples.

To keep your mind ticking, you have to take on new challenges on a regular basis.”

“Having now led Elering with my team for nine years, I can say that the way we complement each other – my leadership and strategic views and my team’s strong technical competence – has made Elering a success story in terms of the development of the regional electricity and gas market, the building of new infrastructure, and the digitalization of the energy sector,” Veskimägi ponders.

“Digitalization in the energy sector and the vanishing of boundaries between energy providers are exciting challenges, and that’s what keeps me here,” he explains.

“Not that I intend to be here so long that I end up looking like Mr. Burns from The Simpsons, of course!” Veskimägi says and laughs.

“To keep your mind ticking, you have to take on new challenges on a regular basis. That’s something I’ve done, pretty radically, two times now. And I’m sure that two will turn into three in due course,” he concludes.

During his EMBA studies, Veskimägi wrote a regular column, “A Practitioner’s Reflection on Leadership”, in the leading monthly Estonian management magazine, where he synthesized the theoretical knowledge he gained from his studies with his practical experience. All of the articles are available on Veskimägi’s blog. Most of the articles in his blog are in Estonian, but Veskimägi has also made contributions in English. This story is part of Aalto EMBA 30 years series. You can find the other stories of the series below. Read more about Aalto Executive MBA.

A Passion for the Job

A Passion for the JobO’Bleness Professor of International Strategy and Director of Research at Ohio University, Michael Geringer has been teaching MBA and EMBA classes at ...

The Skills and Expertise of a CEO Are Put to the Test Every Single DayCEO of Berner Antti Korpiniemi finished his EMBA degree at the end of the 90s, when he was working as a department director in the company. Since then...

Good People Management Leads to Doing Things Well and Positive ResultsChairman of the Board, Unicef Finland, Teija Andersen took her EMBA during a major turning point in her career. “The Aalto EMBA studies confirmed a se...

A Career Full of Highlights

A Career Full of HighlightsNeste Oyj’s President and CEO Matti Lievonen is retiring on October 2018, but he has no intention of resting. In the future, he will share his experti...

A Man Who Can Deliver a Message

A Man Who Can Deliver a MessageProfessor Ron Dulek has been a highly regarded teacher of communication at Aalto Executive MBA since 2002.