Aalto MBA participants did a business project for DNA on how to apply agile thinking in the support functions as well. The tools and recommendations developed in the project have now been tested in practice.

Tuukka Laurila, Sanna-Katri Rautava, Lotta Lipponen, Henna Hynynen and Jannica Aalto did the Business Project for DNA as a part of their Aalto MBA studies.

When DNA defined its organization’s three strategic capabilities a few years ago, agility was chosen as one of them. Agile methods were already applied in DNA’s projects, but the aim was to spread agile thinking even more widely.

This was more than well-suited to the interests of Lotta Lipponen. Lipponen started her career as a software developer, but the focus of her work quickly changed to working with people. She wanted to supplement her technical training background with MBA studies.

“I have worked extensively with different teams as an Agile Coach. I wanted to develop better working methods, find common practices and a common language. Also, in terms of my own career, an MBA degree will open up new options," Lipponen describes.

Lipponen ended up in Aalto EE’s MBA program, which concludes with a nine-month cooperative business project completed as group work. The participants themselves propose the topics of the projects and the most popular ones are selected for implementation.

“Implementing Agile in Support Functions” was a topic that Lipponen developed a couple of years ago together with her supervisor Jari Jokiaho, who is the project office leader (in the picture with Lotta Lipponen).

How should support functions be addressed?

“Regarding timing, the project and Lotta’s studies coincided perfectly with the need to illustrate the meaning of agility to the entire DNA organization. As for development, we know how to do this, but how would you inform the rest of the organization and the support functions about it?” Jokiaho describes the starting point. 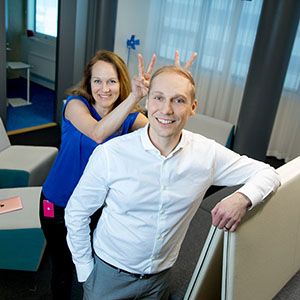 Other participants were also interested in the problem, so the project started at the turn of the year 2019 to 2020. Lipponen acted as a project owner and as a link to DNA, bringing data and necessary contacts to the team. The project also allowed her to focus more closely on promoting agility.

“In the past, when I was in more operational work, I implemented agile thinking throughout the entire organization alongside my own work, and the job proceeded in very small steps. During my studies, I was able to fully focus on the development of Agile DNA,” Lipponen describes.

Also, business projects always have an internal sponsor from the organizations, in this case Jari Jokiaho. He himself had just completed a master’s thesis on DNA’s agility for his second degree, and the thesis also served as a basis for the team’s work.

“I enjoy the results,” Jokiaho describes his role at first, but continues more thoroughly: “I sparred with the team via Lotta, and I think we probably had 2 to 3 sessions. Also, I was one of the persons from DNA who was interviewed for the project.”

Lean vs. agile, support from theory

The essential component of the business projects were also theoretical parts, which are supported by Aalto University professors. DNA’s project was directed by Lauri Saarinen, Assistant Professor of Industrial Engineering, and Tuukka Laurila, Logistics Manager at Telinekataja, was responsible for the theoretical part in the team.

Laurila started MBA studies in order to update and complement his master’s degree in industrial engineering.

“This was the most interesting project option and a topic to which I could most contribute through my own expertise. In my previous degree, I focused on Supply Chain Management. I was familiar with lean and what happens in production and in warehouse work, but not with knowledge work so much,” says Laurila.

Laurila thinks agility and lean are cousins, if not siblings.

”Lean is about eliminating the wastes of the production process of standard products. In agile and knowledge work, instead of standardizing, the final product is customized according to the customer’s needs and most of the planning takes place during production,” Laurila explains.

As for the theory part, the work was also supported by design science methodology, the iterative approach and the change management discipline.

“Change management has quite a big role when establishing new practices,” Lipponen reminds.

According to Lipponen and Jokiaho, the MBA team’s project has moved very well into practice. Application of the practices started already in the early pilot projects and webinars, in which also DNA’s management participated.

“We obtained surprisingly concrete benefits. Most importantly, the team was able to crystallize the idea of agility at DNA’s organizational level. The principles were communicated in DNA’s language and summarized in four main points. In this way, they were easier to convey and understand,” Jokiaho describes.

The project resulted in tools such as the Agile Start-up Package, which enables DNA teams to familiarize themselves with agile thinking and get started putting it into practice. In addition, the team recommended a series of actions for how DNA could continue to promote agility after the project.

“The rest of the action recommendations have also been budgeted for this year. For example, a partner has been acquired for the study path drawn up from the customized training. The first cohort has already completed the training and the next one is already being scheduled,” tells Lipponen.

According to Lipponen, the Agile Start-up Package has improved in each round of use, in accordance with agile thinking. Many teams have also wanted to start experimenting with agility in form of a practical pilot.

“For example, a six-month development project has been carried out in six weeks. The stories of real people spread this happy news.”

Laurila from Telinekataja is also satisfied with the project and the outcome of the whole MBA program.

“I got what I wanted, and this really broadened my horizons. It was a great opportunity to participate in a project where people at the management level say they are eagerly awaiting the results of our work. Also, I got a lot of insight for an agile mobile application project, which I’m leading alongside my full-time job.”

You can download the 'Implementing Agile in Support Functions' Business Project for your reference below:

Currently reading: Aalto Leaders' Insight: Organization-Wide Agility – This Is How DNA Made Good Use of the MBA Project
Show related programs
MORE READINGS RELATED TO THIS ARTICLE

Towards More Sustainable Choices through Aalto MBALilli Norio’s MBA studies made her increasingly aware of how clothing can be manufactured as sustainably as possible. She also gained confidence and n...

How to Make the Best People Stay?

How to Make the Best People Stay?The pandemic changed the ways of working, but also the relationship with work itself. How to find the best people has led to a follow-up question in m...

Aalto EE Has Thousands of Alumni in South Korea and Taiwan - the Collaboration Has a Wide Societal I...

Aalto EE Has Thousands of Alumni in South Korea and Taiwan - the Collaboration Has a Wide Societal ImpactThe partnership in Korea began in mid-nineties and in Taiwan in the early 2000s.

Saji Khullar, Aalto MBASaji Khullar joined McKinsey & Company’s Helsinki office as an Associate in November 2021, towards the end of her studies in the Aalto MBA program. ...

Sustainability Is Emphasized throughout the Aalto MBA Program

Sustainability Is Emphasized throughout the Aalto MBA ProgramSince 2021, Aalto EE has implemented a sustainability focus in its Aalto MBA for Executives program. The focus covers all modules of the program and a...

Will Your Degree Pay Off?

Will Your Degree Pay Off?Accreditations and rankings help you make a wise choice about where to get a degree, attend executive programs or find the best customized training so...

Getting a Degree from an Accredited Institution Will Ensure Your Education Holds Value for LifeEducation is one of the most important investments you will ever make. It has the potential to change your career dramatically. Your degree really cou...